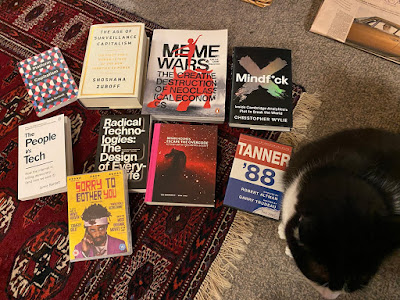 For the last lecture in this term's Global Cultural Industries module for my Broadcast Production students at UWS, I asked a question - what are the possible futures of the cultural industries?

This is more of a shopping list of possible themes/issues to explore than anything scholarly or comprehensive, but the following themes immediately come to mind:

Sampling, stealing and its legacies

From the 70s/80s onwards, the ability to beg, borrow and steal from other peoples cultural products has become a central feature. From Plunderphonics through Cassetteboy to today's 'deepfakes', via all kinds of remix/hiphop culture, the ability to capture and copy seamlessly has massively influenced how cultural production works - and intertextuality, quotation, cross-reference and irony sits at the heart of so much contemporary cultural work, from advertising through cinema and into the visual and performing arts. Boots Riley's Sorry to Bother You is a brilliant example of how this can be deployed for contemporary storytelling and political/cultural satire:

So of course all of this sort of work raises interesting questions about intellecttual property, copyright and who gets to use what - not least your data, your ideas, or even your face! And where is the idea of 'authenticity' in all of this? Does it matter?

Last week's lecture discussed the idea of 'human clickbait' and this Kardashian meme developed by 'Bill Posters (famous for Brandalism) underlines some of these issues:

Archives, memories and curating culture - beyond the 'channel'

We have discussed how TV and radio is moving beyond the linear 'channel' and towards more of a curated/collected, always on demand model...as well as the paradoxical situation of a splintering of outlets, production companies, of small scale DIY production/distribution  sitting alongside and intertwined with great concentration of capital and resource in large corporate entities.  'Making it' in the creative industries (whatever that means...) involves navigating between these two poles...

We also discussed how technology companies have moved beyond simply providing 'tools' but are instead providing platform based 'operating systems' for everyday life - in a seamless blend of goods, services and platforms all held together by inter-operative codes and software. From  physical products/goods, to services, to platforms (and subscription models provide a constant stream of revenue, but what happens if someone switches off the platform, or you can't afford to keep paying?).  I'm writing this late at night on my Apple laptop, logged into a Google server via a BT connection, using a set of softwares/technologies linked by common codes and all of these talk to each other and network together  through agreed common standards to provide a space for public communication (and private profit).

What does it mean when everyone can 'curate' culture, assemble digital artefacts and share? What are the questions of ownership and identity raised by streaming, cloud storage and immaterial/digital cultural artefacts? And what does this mean for the future of broadcasting?  But 'destinations', brands and curating culture still seem to matter - why are you reading this? (Maybe you just stumbled across it...) The extent to which media properties or 'assets' multiply across different platforms, or become mimetic and gather communities of practice around them, has been something that we have wrestled with over the course of this term's lectures.

So the notion of the archive is also becoming increasingly important - whose archives, which archives, and where does the archive go? One of the arguments about the web, (which has its origins  in defence technologies and is often critiqued as a kind of informational 'iron grid'),  is that the 'long tail' of the internet makes stuff available and empowers minorities; there has been an opening up/huge global availability of  all sorts of forms of culture. One of the challenges for 'content creators' is what to do about earning a living form exploiting/monetising assets - what is free, what is paid etc...and the rise and rise of the gig economy, precarious labour, forms of digital indenture and 'piece work' have also been chronicled in the lectures.  I love this song/video by Brooklyn based rapper Miss Eaves    which satirises the 'reputation economy' and people being asked to work for free:

For a endlessly fascinating archive of some countercultural / avant-garde artefacts, many of which largely defy 'monetisation' and the 'commercial', just take a look at UbuWeb. And for something closer to home, my colleague Ben Parry's work on Cultural Hijack curates lots of artists who are challenging prevailing orthodoxies in innovative ways in public space.

In this world where everyone can be a publisher, we also see an excess of production - hyper-production...and this also establishes complex issues/questions about value, 'truth' and trust. How do you know whether something that you are accessing is authentic, or real? How do you develop the skills to deconstruct the ideologies and systems that drive claims of authenticity or representation of reality? What is changing about claims of authority or authenticity from publishers?  Why do people trust 'influencers'? Is it because they seem to be people just like them? What are the webs of ideology, representation and storytelling/framing around the ways in which 'ordinary people' construct their online identities? And  does this enable  new forms of subliminal persuasion, manipulation and advertising to take place as well as cracking open (or simply reinforcing?) existing hierarchies in journalism, the media and wider society?

And if everything is turned into ephemera to be plundered and reworked ('all that is solid melts into air...') - which links to both our appetites for algorhythmically-derived feeds carved from informational data mining and then their infinite replication, reproduction and repetition through our own social media accounts - we become like correspondents embedded in a meme-based culture war.  This culture of repetition and sharing helps to bring emotions and feelings to the fore in our political and cultural responses, as Will Davies has recently pointed out. Continual repetition of slogans or various other form of market-tested earworms can determine realities and establish 'truths' - hence the constant hammering-on of the absolutely fictional/utterly implausible slogan 'Get Brexit Done' in the current election campaign from the mind of cybernetics-obsessed Ayn Rand fanboy Dominic Cummings.

In an attention economy, what drives revenue is audience size - hence the idea of 'human clickbait' - atracting eyeballs and encouraging audieces to simply click through to the meme or video generates revenue for the producer. Nick Srinicek, in a lucid account of how late capitalism is mutating into 'Platform Capitalism', explains : 'Digital platforms produce and are reliant on 'network effects': the more numerous the users who use a platform, the more valuable that platform becomes for everyone else'. And within this, the notion of public, free to use communication spaces, linked to the utopian idea of the 'digital agora' set out in the late William Mitchell's work on 'City of Bits' - become enclosed, privatized and able to be mined and manipulated for profit.  In this scenario, we are all caught up in the ways in which services that are 'free to use' make use of our data to sell back to us algorthythmically derived notions of what we are likely to be interested in. John Lanchester makes the case for this here in his essay/review piece "You are the Product."

"Platforms, in sum, are a new type of firm: they are characterised by providing the infrastructure to intermediate between different user groups, by displaying monopoly tendencies driven by network effects, by employing cross-subsidisation to draw in different user groupds, and by having a designed core architecture that governs the interaction possibilities." (Srnicek, 2017 p.48).

So we are increasingly caught up in these giant revenue generating machines - new forms of rentier capitalism - and they get built into the operating systems of our cities and our lives - they may well be free to use but we pay a high price in terms of security and privacy.  So -- 'big data' and its legacies are important - who owns and runs the 'smart city', and what happens to your data and your relationships under these regimes?

Or maybe we just will have to pay, rather than expecting everything for free.  The return of subscription models for media is one trend...

We have also discussed the rise of a kind of hyper-libertarian Californian ideology - how were computers imagined as tools of counter-cultural change (see Fred Turner's important book on Stewart Brand network and the rise of techno-utopianism) and Richard Barbrook and Andy Cameron's  framing of 'The Californian Ideology" -- brought together in this entertaining set of presentations from 2015:

For more historical perspectives on these libertarian ideas about 'individual freedom' and how they are tied up with forms of market-worship and technological determinism, Adam Curtis's documentary series 'The Trap' (from 2007) offers some arguments;

And if you want to get a sense of how both powerful actors from both the state and private sector see the future of 'information technologies',  check out Peter Thiel's venture Palatir - building huge relational databases for use by law encforcement/spy agencies that draw together all the information that is publicly available from our digital footprints..and claiming to be able to predict the future (often using machine learned techniques drawn from racial profiling) with some accuracy. Once you're lost in some good old fashioned paranoia about the power of corporations and technologies, (c.f. some of the preoccupations in films like 'The Parallax View' from 1974), consider also  all the affliate marketing scams, 'get rich quick' schemes and 'how to build your online business' clickbait stuff promulgated by people like Tory cabinet minister Grant Shapp's alter-ego 'Michael Green'...Which also links to some material on various brands of toxic masculinity, as another ongoing theme...

Hypermasculinities - 'HSBC Man' and his legacies

There's another much longer blogpost to be written about this but I'm also interested in how hypermasculinity (particularly a kind of fascist-esque white supremacist masculinity) has infected contemporary culture (it probably never went away, but it's right here in plain sight). Here are few thematically related extracts from media I like to teach with - spot the links:

Climate change and eco-culture, the anthropocene

The cultural industries have been slow to respond to the climate crisis, not least in working out how the externalities and costs of all the supposedly 'weightless' digital infrastructures on which we depend - server farms, wireless transmitters, networked devices, screens etc contribute to carbon generation. And secondly the advertising-entertainment-industrial mediaplex means that many businesses have a vested interest in maintaining the status quo (cue more Adam Curtis and work on advertising, corporations,  media and persuasion in general):

Clearly this is a rather over-simplified argument and much more work needs to be done (and is being done) on the culture-climate interface...There are plenty of artists, writers, filmmakers etc offering various strains of utopian and dystopian visions of the future, as we have discussed.

Beyond algorhythms feeding our social media and our purchase histories and our views of the world through 'filter bubbles', how else is AI and machine learning likely to affect/impact human creativity and the creative industries? There is lots more to be said about this...here's just a start:

How is 'digital reality" augmenting reality, or is embedded into everyday reality and the composition of everyday interaction? What will the consequences be of this for everyday architectures in terms of social transactions and the spatial design of homes and workplaces as we enter a new era of 'immersive technologies' and widespread automation?

Personal devices and the mediaplex

(and here's a vison of the future from the mid 1990s...more elsewhere)

...and into simulated worlds of crime and war, all drawing on multiple tropes from Hollywood, news media, documentary practice and contemporary culture/politics...


A few artists, articles and practitioners worth looking at in relation to these themes/arguments:

Boots Riley and The Coup

Brian Holmes' 'Escape the Overcode: activist art in the control society' (2009) and his pamphlet from 2016 Driving the Golden Spike

Posted by generalpraxis at 2:50 am

Upcoming and recent talks by Graham