Some thoughts on the UK's current energy predicament

I tried to post a thread on Twitter but due to my general incompetence with social media it didn't work properly. So I've put it here (slightly revised and expanded) instead:

I’m old enough to remember the days when the UK Govt (& thus the taxpayer) owned the Central Electricity Generating Board, & their Scottish equivalents, & British Gas (which was merged from regional gas boards). A thought experiment…(1/..)

In the 1980s the Thatcher government privatised all the utilities - power, water(except in Scotland), gas (British Gas had been merged from regional gas boards in the 1970s), plus telecoms & rail, and the outlines of the current privatised energy system were introduced.

Proponents of privatisation argued the private sector would be more ‘efficient’, that shareholders would bring fresh investment that the taxpayer wouldn’t have to pick up, and that competition between companies for households’ business would keep prices down.

Small investors were encouraged to pick up shares in the new utility companies and the intervening years have been something of a bonanza for shareholders, although the ownership structure of UK utilities is now insanely complex, with many international entities including foreign governments, funds and other energy firms having stakes in them, with a complex regulatory regime (Ofgem etc) that appears to have been asleep at the wheel.

I haven’t done the maths (perhaps someone at @ft can help) but the total revenues and profits of our biggest utility firms must now be hundreds of billions of pounds a year: dividend payouts from energy firms are amongst the highest in the stock market.

We are now facing a full blown economic crisis particularly around energy costs which will drive up household/business bills to unaffordable levels and add huge inflationary pressure across the economy - with resultant hardship, job losses, erosion of wages/savings, stress etc.

The case for either a BIG government windfall tax on utilities this year (or an ongoing levy on profits) is thus absolutely solid. A way of getting some help to households/businesses struggling to pay bills and making the utility shareholders share the pain of this shock.

Looking further ahead one wonders what might have happened even if the utilities had been just part-privatised, with the govt retaining a stake in them (kind of the EDF model, although EDF is basically the French state )-- & also how the UK has run nuclear energy.

Investors didn’t want to shoulder the risks around nuclear - look what happened to British Energy. BNFL publically owned. So we CAN run nationalized utilities when we want to: look at the rail companies! When they're not making giant profits, the private sector doesn't want to know.

I don't claim to be any kind of expert in energy policy but it seems to me that the wave of privatisations now looks like a colossal mistake, involving massive risk taking with energy security, and loss of revenue to the exchequer, which the public is now having to suck up and pay for, as usual.

Of course advocates of privatization will say that it's brought inward investment, created dividends for pension funds, ordinary investors and the like and that the utilities pay millions in corporation tax every year (except when they don't). And that they (and their very well paid directors) should be rewarded for their outstanding leadership and risk taking, la la la, etc etc etc.

With greater public ownership we could have shared in the profits (cf. Norway's Sovereign Wealth Fund) and also insured ourselves against potential price shocks. We export energy to the highest bidder (free markets, baby) and our energy security is thus shot to bits.

Massive over-reliance on hydrocarbons and a systematic refusal to invest in renewables/insulation/energy efficiency/ or lower demand and build green infrastructure over decades, has left the whole population (except the super rich) extremely vulnerable to market shocks. Even without taking into account the climate impacts this seems like a dangerously stupid policy, and makes our economies hostage to hydrocarbon producing states whose human rights records are highly dubious, to say the least. So this is a security issue as well as a climate and social justice issue.

We need a total rethink of our energy system to deal with climate change - it is absolutely intertwined with the current geopolitical turbulence. Energy storage technologies are also absolutely critical - batteries, fuel cells etc...but these batteries are also reliant on raw materials/manufacturing processes that come from parts of the world that often get labelled as ‘unstable’ - again showing how intertwined energy systems are and how energy security is a global issue.

Local renewable generation schemes? Combined heat and power? Micro generation? Solar? Tidal? Home insulation schemes? Radical energy efficiency? I remember all of this was debated heavily in the 1970s after the oil price shock of 1973. 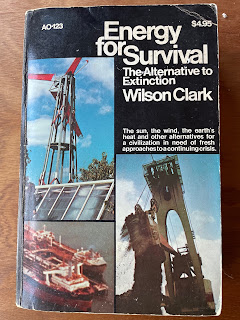 President Carter argued heavily for investment in alternative energy, particularly solar, and here he is addressing the nation about it in 1977. We've hardly heard any talk like that from any American president since...

But then Thatcher and Reagan, (Thatcher on the back of soaring North Sea Oil revenues) went hell for leather on the hydrocarbons and slashed R&D funding for renewables - heavily lobbied by the multinational oil lobby.

And what about a bit of nationalisation? We always seem to manage to do it when the private sector blows up shareholder cash (see RBS, HBOS, Railtrack etc) but not when it’s profitable for shareholders. Why is that? See here for more arguments.

Posted by generalpraxis at 2:48 pm No comments:

Posted by generalpraxis at 5:21 pm No comments:

Why Championship Chess Sets are So Expensive
https://www.youtube.com/watch?v=-Tg9xiJ6D6k
'A trash heap for our children': How Norilsk became of the most polluted places on Earth
https://insideclimatenews.org/news/28112021/norilsk-nickel-russia-pollution/
'Back to the bad old days': swingeing rail cuts set alarm bells ringing
https://www.theguardian.com/business/2021/dec/05/back-bad-old-days-swingeing-rail-cuts-alarm-bells-ringing
Treasury Shelves £30bln Plan to Electrify UK Railways
https://www.businessgreen.com/news/4041951/reports-treasury-shelves-gbp30bn-plan-electrify-uk-railways-cost-concerns
Climate Change has destabilized the Earth's Poles, putting the rest of the planet in peril
https://www.washingtonpost.com/climate-environment/2021/12/14/climate-change-arctic-antarctic-poles/
The Least Used Paris Metro Station
https://www.youtube.com/watch?v=4EtBKPcHPrE
He Voted to Impeach. Can He Survive in the G.O.P.?
https://www.theatlantic.com/magazine/archive/2022/01/peter-meijer-freshman-republican-impeach/620844/
Who's watching? How governments used the pandemic to normalise surveillance
https://www.latimes.com/world-nation/story/2021-12-09/the-pandemic-brought-heightened-surveillance-to-save-lives-is-it-here-to-stay
Peter Thiel's 'Free Speech for Race Science' Crusade at Cambridge University Revealed
https://bylinetimes.com/2021/12/10/peter-thiels-free-speech-for-race-science-crusade-at-cambridge-university-revealed/
Despite the Focus on Russell Group Institutions as drivers of social mobility, it is actually universities outside this group that are contributing most to social mobility
https://blogs.lse.ac.uk/impactofsocialsciences/2021/12/16/despite-the-focus-on-russell-group-institutions-as-drivers-of-social-mobility-it-is-actually-universities-outside-this-group-that-are-contributing-most-strongly-to-social-mobility/
All That Sugar: The West India Docks
https://www.youtube.com/watch?v=ty3EiW5DZcI
UbuWeb Sound: Sound Sculptures (1985)
https://ubu.com/sound/sound_sculptures.html
Soft Machine: Moon in June (Bilzen Festival, Aug 22 1969)
https://www.youtube.com/watch?v=soQN0sMU0Ck
Mozart: Concerto for Piano and Orchestra No. 17, live from Teatro La Fenice
https://www.youtube.com/watch?v=4-qB3JwhMVA
Chicken Madras being cooked at Bhaji Fresh, Warrington
https://www.youtube.com/watch?v=G529fgJO51E
Posted by generalpraxis at 6:16 pm No comments:

Things I noticed over the last two weeks (28th November 2021)

After a brief hiatus, a bumper edition:

What makes for the best villains in drama? Brian Cox/Economist podcast
https://www.economist.com/podcasts/2021/11/04/what-makes-for-the-best-villains-in-drama?

At the End of the World. it's Hyperobjects all the way down
https://www.wired.com/story/timothy-morton-hyperobjects-all-the-way-down/

A look at what sewage is doing to a beach in England
https://www.youtube.com/watch?v=n9IpOcJqgX0

Home Office covering up its own study of why refugees come to the UK
https://www.theguardian.com/uk-news/2021/nov/20/home-office-covering-up-its-own-study-of-why-refugees-come-to-the-uk

AOC: What's so hard about saying this is wrong?
https://www.youtube.com/watch?v=AxiK3tGpHuE

Living in Poverty as Politicians Argue over Huge Salaries
https://www.youtube.com/watch?v=KibJsTOOvsI

Posted by generalpraxis at 12:50 pm No comments:

Cabview: Early Morning on the R11 to Skien, Watching the Sun Rise

What older vintages will be perfect to drink at Christmas 2021?

Posted by generalpraxis at 6:22 pm No comments:

These Climate Science Deniers are attending the COP26 climate summit

You want to see a modern country commit suicide? Take a hard look at Britain

A castle for sale in North Ayrshire: probably some of the cheapest property (per square foot/acre) available in the UK...

David Lammy: the Tories think rules are for little people, not them

Transparency over emissions remains a sticking point at COP 26

Posted by generalpraxis at 1:27 pm No comments:

Hey Facebook, I Made a Metaverse 27 years ago: it was terrible then, and it’s terrible now https://www.theatlantic.com/technology/archive/2021/10/facebook-metaverse-was-always-terrible/620546/

Brexit chaos: the crisis that shouldn’t be

‘We’ve been hammered’: on the breadline in Burnley

Hey Facebook, I Made a Metaverse 27 years ago: it was terrible then, and it’s terrible now

An Energy System Fit for the Future? a report on the ownership structure of the Big Six energy companies

Dreamlands: stories of enchantment and excess in a search for lost sensations

End of the Line for Uber? Accounting tricks and tech gimmickry… |

Posted by generalpraxis at 3:13 pm No comments:

The Great Chicago Fire of 1871

Who is Sajid Javid?

Posted by generalpraxis at 8:32 pm No comments:

Upcoming and recent talks by Graham